Essay ‘Painting as a concert’

Hidde van Schie is charged. His paintings are charged – perhaps even overcharged? However, through his work he is able to offload this energy and to rid himself of this excess. Expressing his opinion, and letting his feelings run wild – for everything, the artist finds an outlet. That there is so much to say is maybe a reason for his abundance of works and the heterogeneity in the medium, ultimately the ‘noise’. “There will be sleeping enough in the grave” as Benjamin Franklin would say. Van Schie’s strategy of image production is not gentle, leisurely, successive, nor seemingly well-considered, but rather the rapid filling of an empty vessel until the barrel overflows. Writing about these images is not easy; they are always ahead of you in their provocation leaving you no respite. They are already exclamation marks, always stressed syllables.

All arts are orientated to our senses. Disciplines such as painting and music whilst focusing mainly on our visual or auditory senses all share an aesthetic effect, which is influenced by the experience on all the senses. When Hidde van Schie as performing musician plays guitar and sings, it touches one immediately in a quiet, tender and wistful way. They are love songs, coming from the heart both melancholic and dramatic.

(Excerpt from the song “White Horse”)

Standing on the stage, van Schie confronts the kitsch and the exaggerated with an unpretentious form of performance. If he is painting then van Schie screams, loud and shrill. It also touches one immediately. An aggressive, dazzling and unsparing hand speaks through his paintings. Bringing these together with the gentle melodies in his love songs doesn’t always connect immediately. But when you get to know him and talk to him, simply spend some time with him – the two at first contrary areas combine to form a coherent entity – both are manifestations of his energy. And it is this energy that creates the concert, both the noise and the whispers.

I still remember
The first time that I touched you
Every movement brave but shy,
Underneath that cold November sky

(Excerpt from the song “All Of This”)

If we describe van Schie’s art as loud or soft, it is as an attribute of the auditory sense. However, when we have works such as paintings, collages and sculptures – they are all visual genres. How can this come together? Working as signals to several senses simultaneously they form a synergy between the sensory stimuli. For example the effect of the simultaneous stimulation of several senses is also present in the perception of rhythm. Therefore our perception is formed by the combination of different sensory stimuli. The American philosopher John Dewey writes: “Nothing is perceived except when different senses work in relation with one another (…) If the eye is the organ primarly active, then the color quality is affected by qualities of other senses overtly active in earlier experiences.” ¹

The difference between temporal and spatial perception can be defined as the difference between successive or simultaneous recognition. Visual stimulus is bound to space while in the perception of sound it is different. What we see we can locate in front of us, what we hear is around us. Outlined here and common in science is that auditory experience is gradual, and that the visual is simultaneous, however, this is a simplification.

Our perception is determined through an interplay between these two forms. Whether you want to call it a synaesthetic pairing is up to you. And it is exactly in this interplay, where van Schie’s work is situated. To understand his paintings as concerts alludes to such a ‘Complete Perception’ (Dewey, Aesthetic Perception’ ²) which is associated with a subjective contextual experience.

The Sonore (whether it is noisy or quiet) in van Schie’s art and music creates a balance through a mental strategy. The artist sees painting not only as a medium but also as a way and a possibility to think. When he paints, he is less concerned with a specific technique, but sees it more as an attitude towards expression. He is not lead through an intention of illusionism. In keeping with Clement Greenberg, he treats the image as a pure piece of canvas. It is a platform for him, a vessel for his own statements, but also an area to investigate further possibilities. Van Schie’s almost stoic way of working is coming out of permanent attention and reflection and shows the urgency of creating the work to enable his own thinking process. As he works, he works through things. The pathos of his pictures is counterbalanced by the artist’s relaxed and unpretentious attitude. His paintings are the result of a (mental) process and according to a quote from him, “simply the sum of a set of decisions.”

Looking at the paintings of van Schie more closely, they seem more aware of composition, a fluctuating intuitive improvisation, (again a phenomenon related to music). The rhythm guides the artist. Different tempos pervade his work. When his songs are rather slow and modest in their attempt to outline and compose something, so his collages and paintings are bold statements with colorful excessive brushstrokes.

The large-scale paintings are very colourful, almost too colourful. With only a hint of discretion and earthiness, the red, pink, bright yellow, purple and light green together form a riotous combination. This also refers to the technique: a type of dripping forms the background; over this are clearly recognizable and decisive brush strokes. Before starting to paint van Schie, pulls the wet canvas onto the stretcher. He then sprinkles and sprays them with acrylic and turpentine. With this he creates the basic key, on which the melody of the image is founded. By doing this he eliminates the problem of the empty canvas. However, this first layer still retains the function of the (pure) background. The artist says: “Acrylic is often quite arbitrary, it produces a kind of atmosphere but is also just a technique, i.e. it does not require many decisions.” Therefore it is a process of image production that is less directed by an existing idea; rather it is created through the process of a mixture of spontaneity and consciously chosen forms.

But despite the instrumental nature of the acrylic background, it is ultimately often the motif that once it is there it is that which leads the brush. So, beside a recent series of paintings that do not show a certain theme (e.g. Symptoms of Organization, 2011) you will not find many abstract paintings in his studio. You will more likely find birds, naked women, skeletons, cars and butterflies. The abstract paintings are something like a shadow-ouevre, a leftover collection of overworked paintings. Every now and then a painting gets out of control but van Schie keeps working on them until the painting reaches a point where he can go no further; then the painting is finished.

Generic gimmickry as a typical phenomenon of our time, it is thus a central subject for the artist and is very visible in his works. Van Schie says that dealing with this phenomenon has almost become an everyday task and this we have to face. Thus, his paintings especially those of the crying birds work like a game playing with the power of such things. With a continuous, nearly endless series of birds painted over several years van Schie has attempted to create something new from rather flat basic conditions to question apparent truths.

In his painting he has not tried to create a trompe l’oeil effect – on the contrary – his works show what they are: paintings, collages and sculptures. In the painting The Bird with the Crystal Eyes (oil, acrylic and spray paint on canvas, 2010) the bird presents itself to us full size and in its entirety. Emerging from a dark purple background it appears to us wings open wide, however, still with its claws gripping firmly on a branch that is extending from bottom right to left, moving across the canvas. White, crystal-like yet mute eyes defy the dour face, white tears streaming down over its lead-blue plumage. The feathers are of short dashes and dots more suggested than actually worked. No naturalistic representation is offered to us.

The birds show above all Hidde van Schie’s artistic development within one topic. Repetition makes a motif a serious subject and perhaps even more. But why always birds? The book Bird Families of the World was the artist’s original source of inspiration. With this book and first sketches came the idea for ​​an exhibition. Until today the artist sees within the images of the birds the vision of this show. It was whilst reading Gabriel Garcia Marquez and being completely engrossed in the magical-realist world of the Colombian author that he started to imagine an exhibition where only paintings of birds were shown: and a poetic and perhaps even magical show it was. Led by this narrative approach, he painted bird after bird and the subject wouldn’t let him go. While working on the bird images van Schie saw clearly how we relate to animals and deduced that our relationship to them is often full of symbols and attributed meanings; as with birds which represent peace, wisdom and freedom. However, birds of prey also spit out pellets of fur and bones and the cuckoo lays its eggs in other birds’ nests and the magpie is known by everyone to be a thief. Once captured on the canvas, these animal associations are represented and reinforced. One begins to read it immediately iconographically. Moreover because of their oversized depiction these associations are even greater. In this instance van Schie saw potential and risk and wanted to pursue both issues.

Whilst absorbing himself in the process of painting, he must also surrender himself to the birds. Somewhere between honesty and irony is located his relationship with the recurring motif. Usually he is guided by a purpose or a feeling of the bird, then at some point the bird takes over the hand and directs the flow of the painter.

When the birds are painted again and again, it becomes like a sound repeated so often as in a mantra, where the individual intonations become more an accumulation of noise in order to achieve the overall transformation. The intention of each painting takes a back seat in favour of the broader topic. The sheer mass of colour and mysterious variations show sad, mostly crying birds in shrill variegation. The stubbornness with which van Schie uses the medium of painting, makes precisely this sense of displacement and intensification of the topic possible.

But the idea of the exhibition and the study of bird-symbolism are not the only causes or arguments for the continued work on the series. The birds are also for van Schie a strategy, because actually it’s about the painting itself. He freely admits that the animals allow him to paint. They offer him support. Looking at the birds more closely, one realizes that they hardly fly. They also seem to need support. These beings standing proud in the pictures with their oversized claws, grasping on tightly. But even as they cling so tightly they are still difficult to locate. This is because van Schie’s images in the way they are painted have a two-dimensional aspect. The birds range from being real-placed figures within the space to pure application. A back and forth movement between foreground and background as a game between figure and ground occurs. Contours become unimportant. The impression of the whole is the focus, and hence the distribution of power covers the entire picture. The birds are a means to an end, and therefore part of a prefabricated and recurring setting. There is not a plot as a counterpart to the setting in van Schie’s pictorial space. The action and thus the successive, like as in sound happens somewhere else – behind the surface, or as described earlier, around us.

(Translated from german by Clare Kenny) 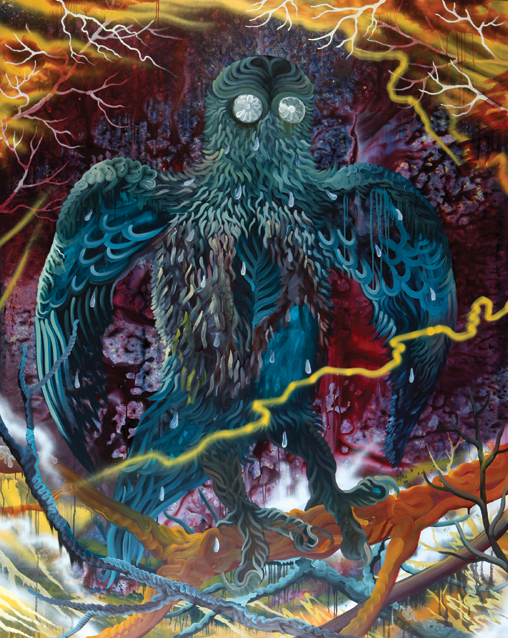